Show Us Your MiSTers

It do look quite good in the last pic, even better if you take 1-2 steps back and take a slightly blurry picture

Enthropy wrote: ↑Mon Feb 08, 2021 7:54 pm Because essential parts of MiSTer devoured all my spare money, I have decided to try to make a case from junk found around my basement. It should not be that hard, right? Wrong! I will never be a carpenter

At least it keeps my cats from chewing cables and munching on unprotected PCBs.

Baby steps. Remember, everyone starts somewhere. People that have worked with wood only make beautiful finished creative stuff after probably a decade of practice and 10,000 hours. Most carpenters are just following a design and doing the same thing over and over (a couple friends do carpentry professionally) or doing things that are just functional and not aesthetic.
Top

Got a new case with a custom ioboard/usb combo from taobao (saw it on the Mister Facebook group). They have various colour variants and even an aluminum design.
Very nice and slim design. They replaced the vga port with a sega Saturn one. Which is okay. But I think I would prefer the vga one. I added/fiddled a usbc port for power which cracked a bit of the plastic. Nothing superglue can't fix. Here is my temporary setup, until I get some proper mounts for the Dell.
The Mister is in a plastic case under the Philips Monitor. The CRT is a Philips CM8833 Mk2, the menu-only resolution is slightly too high for the Philips, but any lower and the Dell LCD goes mad. The Dell is a 20" 2001FP LCD, and is only for cores that won't output a 15hz signal such as the PC ao86 core. Arcade stick is a Hori Rap V4, and the keyboard is a nice Razor Blackwidow. Speakers are M-Audio monitor speakers.
This is my favourite gaming corner of my spare room. I love using the Mister late at night, especially on computer cores where the backlit keyboard is perfect for night use. I recently got the same case in the clear color, it is exactly what I had been looking for!

However the buttons didn't fit, because the buttons of my analog board are too high for some reason. So I found a clear acrylic rod online with a diameter of 8 mm. They did have clear colored rods as well, but they were only 6 mm. I had to sand it down slightly and still need to polish and then cut it to button rods.

To keep those rods from falling out, I found clear 8 mm silicone rings (at an online piercing shop, lol). I think the end result will look great.
Top

Since I started using MiSTer last December, my MiSTer has been a bare DE10-Nano with just heatsink and SDRAM board.
Now I got beautiful clear acrylic case, IO board v6.1 with Noctua fan and USB Hub v2.1 from misterfpga.co.uk bellwood420 wrote: ↑Tue Feb 23, 2021 8:59 am Since I started using MiSTer last December, my MiSTer has been a bare DE10-Nano with just heatsink and SDRAM board.
Now I got beautiful clear acrylic case, IO board v6.1 with Noctua fan and USB Hub v2.1 from misterfpga.co.uk

I have the exact same case, it is fantastic, I like how it has labels for all connectors. Really cool to be able to see all the lights. Shows off the nice blue-green color of the PCBs as well. Still need to finish creating my acrylic rods to be used as buttons.
Top

new addition to my case 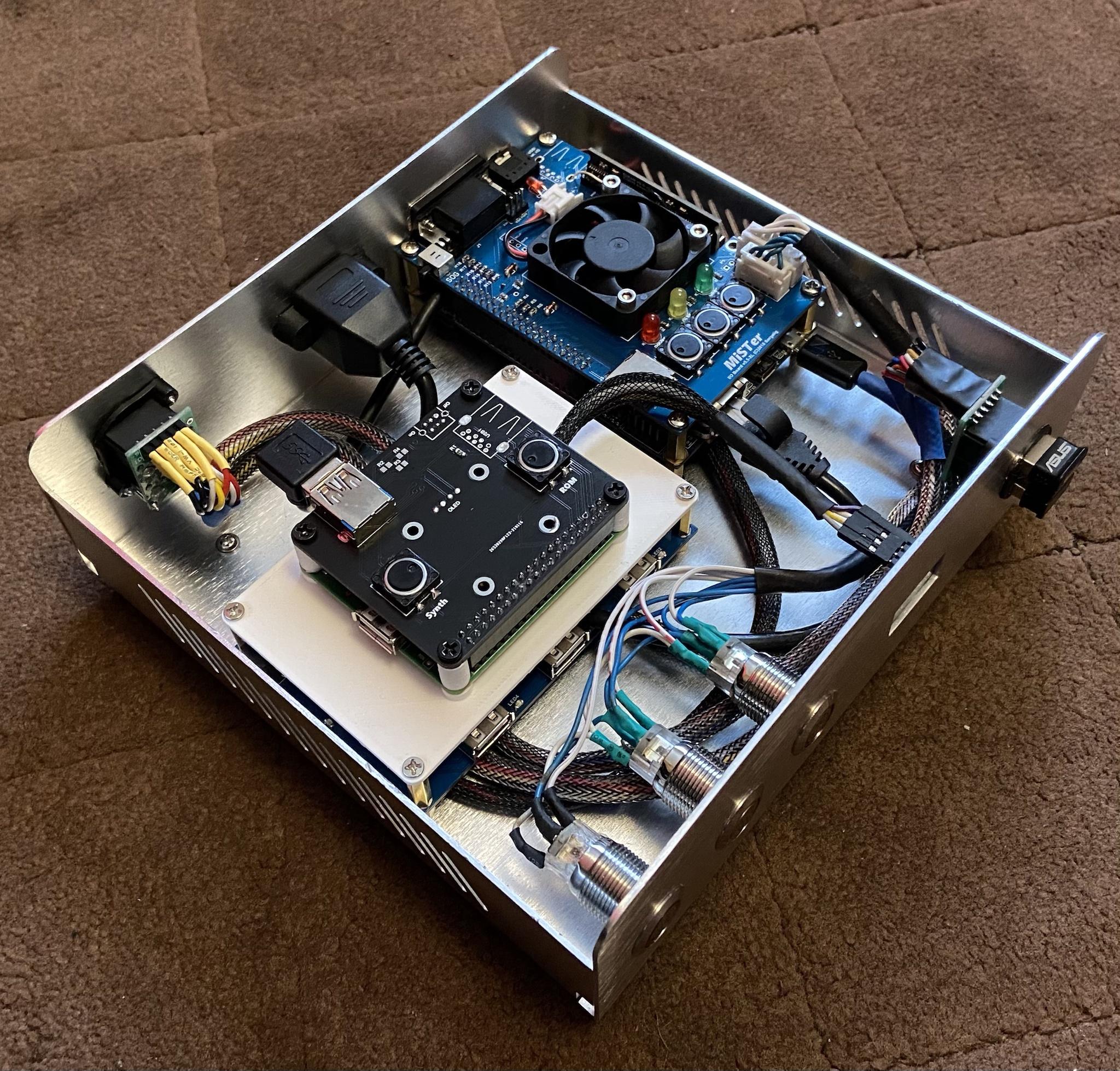 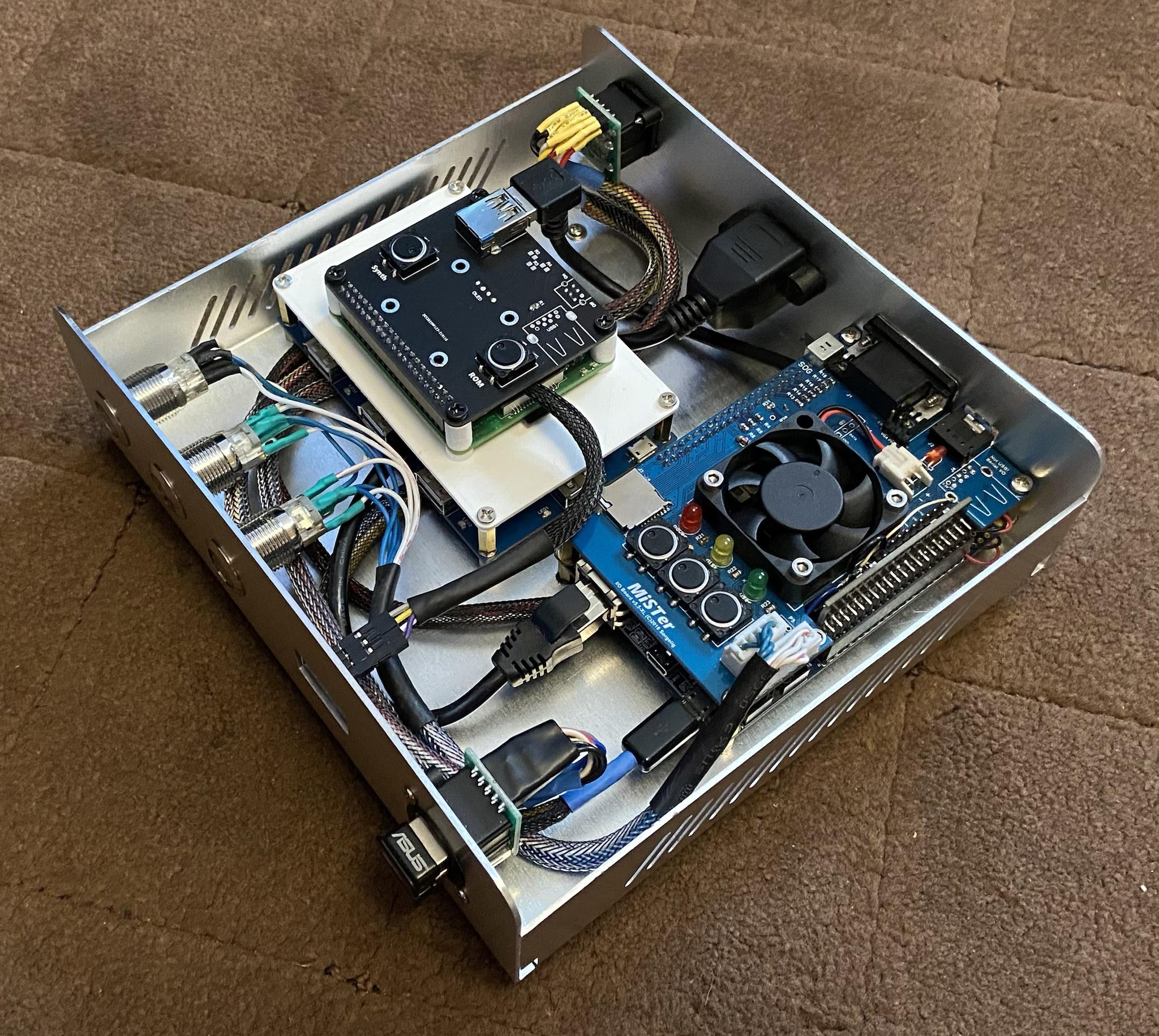 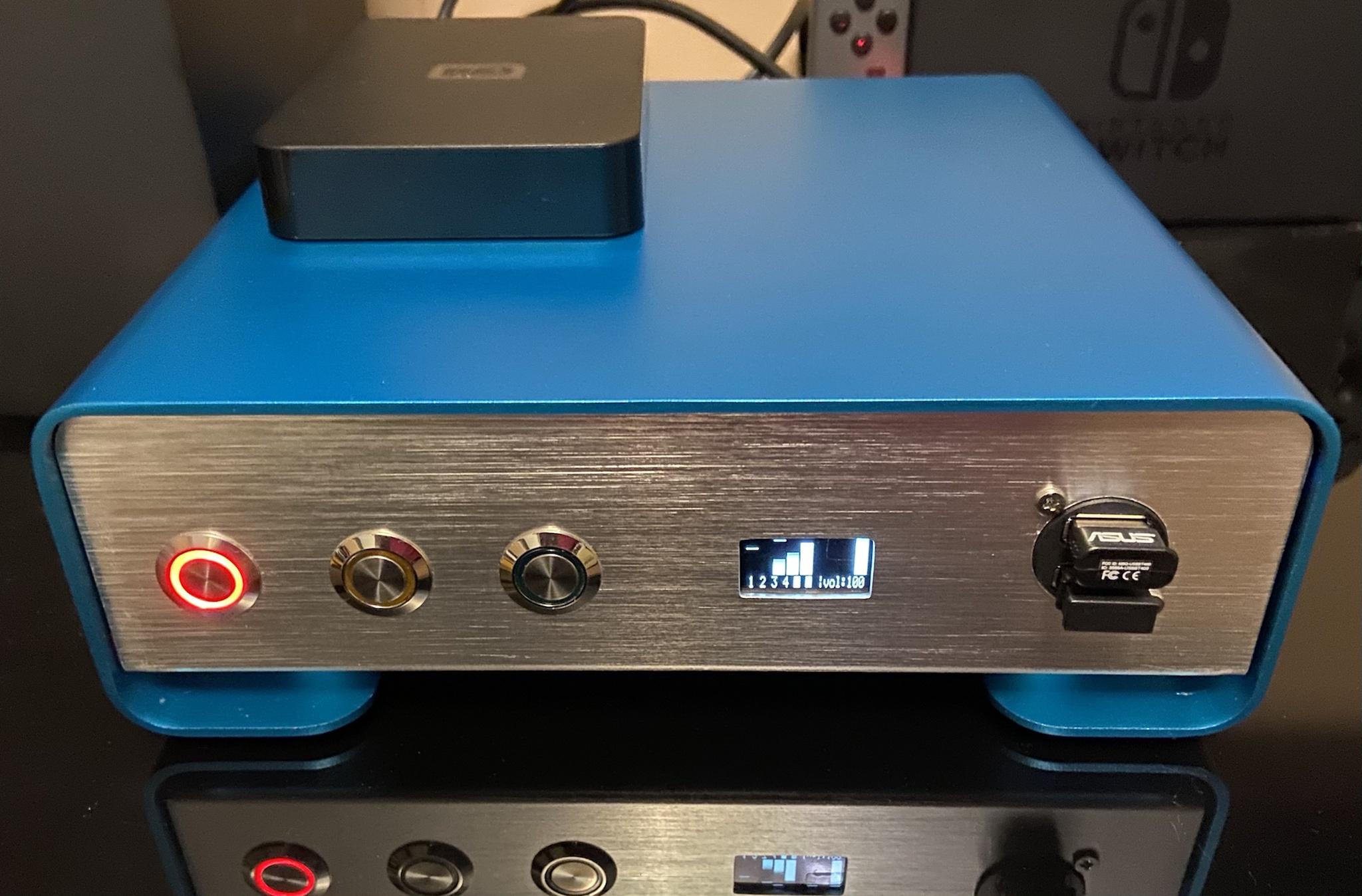 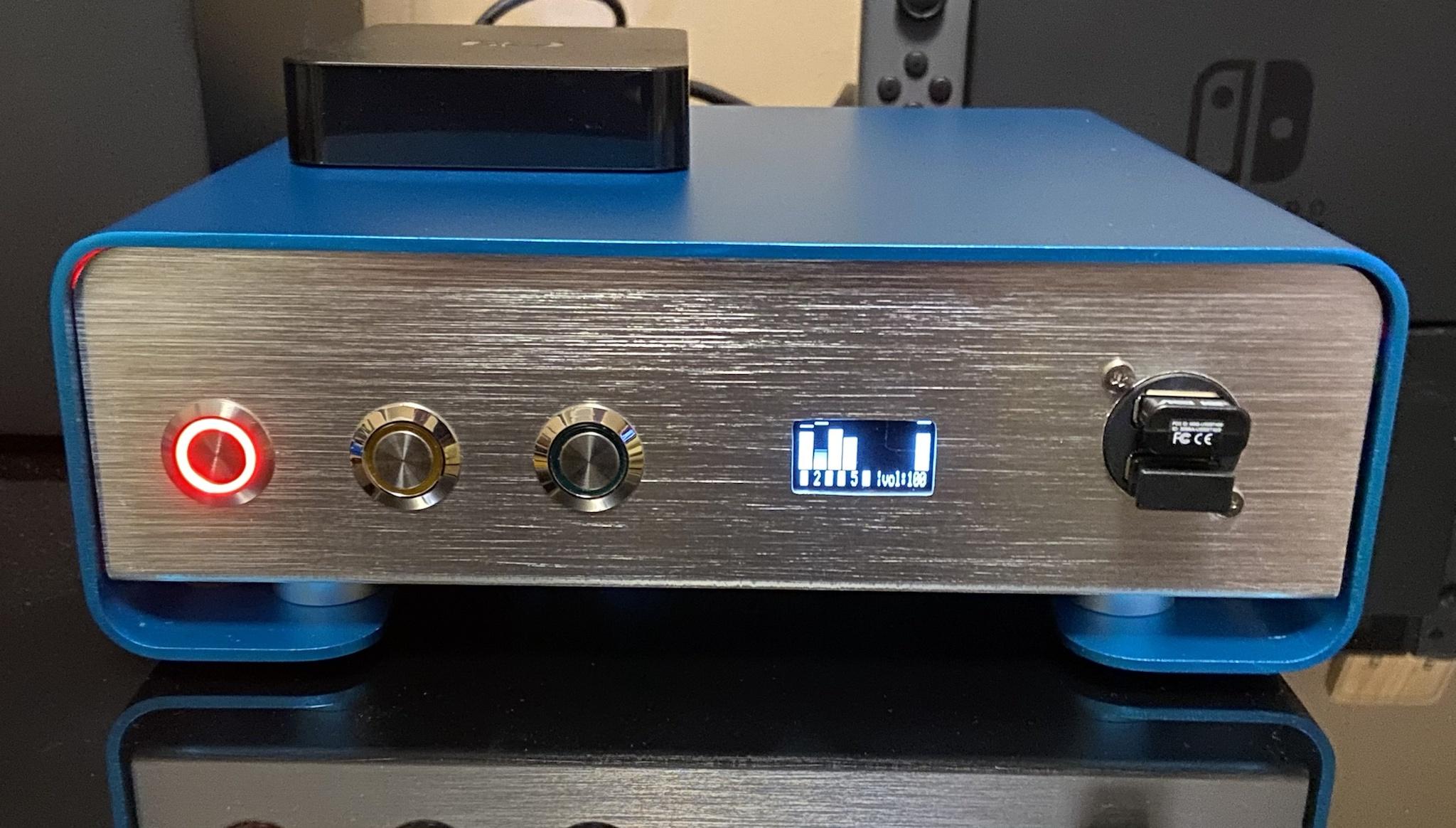 very very nice.. great work
The music is reversible but time is not. Turn back. Turn back
Top

Just upgraded my MiSTer from a really crappy 3D print to this one!

Just got my MiSTer set up so it's still rockin' the naked look, but I'm working on designing a custom case for it. Here's the first test cut off the CNC for the front panel. Still a few tweaks to make to the machining and I need to figure out fixturing so I can machine the other side (which will clear out the through-holes). I'm going for a N64-style layout with two USB ports on either side with the power/reset/OSD buttons in the middle.

Components are on the slow boat from AliExpress, but since the USB ports use standard d-style mounts and the buttons are standard 12mm/19mm, I'm hoping all of my measurements are good and I won't have to rebuild anything for the CNC. 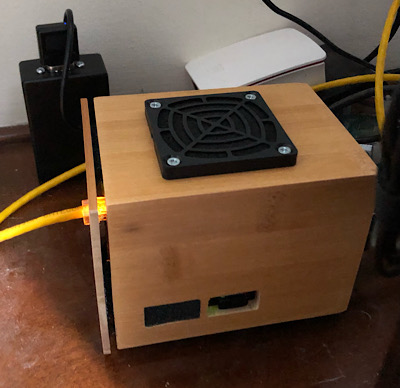 It’s pretty crude, but here’s my home made mister case. The basis of it is a pencil box that I noticed was just the right size for the de10 nano. The front panel is made from a divider piece that’s supposed to sit inside the box. Also visible is my old little-used raspberry pi and on the left my daemonbite Genesis controller adapter and 2.4ghz M30 receiver plugged in to it. 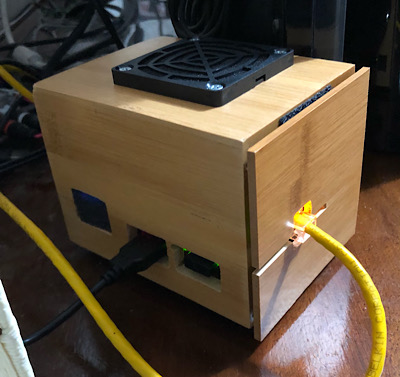 Here’s the other side. I only cut holes for four of the USB ports, and I’m only currently using three. I made the holes fairly wide in the hopes of being able to grip my USB dongles through them, but it’s still pretty hard to get them out. Should have gone for taller narrower holes, I think. The bigger hole near the back is for SD card access. I covered it with a piece of foam that I cut to size from the packaging of the de10 nano. 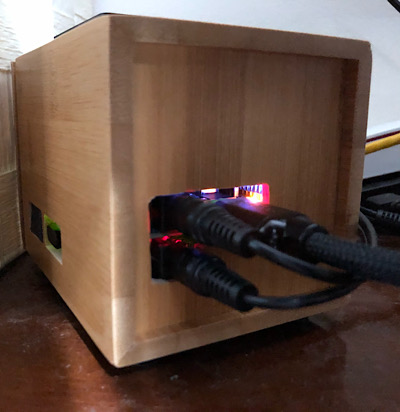 Here’s the back panel. Not much to say about it. 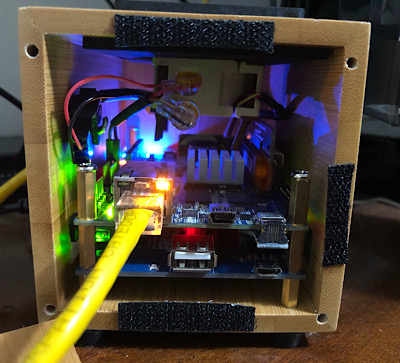 And here’s the inside. The four holes around the edges are because I was planning to mount the front panel with screws, but when I tried to drill the holes in the panel the wood split (fortunately it came with two). So I used stick on velcro, which also has the advantage of creating a few millimetres gap, which the USB board’s connector needs. I was hoping not to cut a hole for the network cable, but I couldn’t get wifi to work. The board is held in place by screws which go through rubber feet and the wood into the board standoffs. The fan is mounted to the roof with silicon spacers. Because the wood is thicker than what fans are usually mounted on I had to pull them through from above rather than below, and the fan wound up sitting a bit low. I stuck some adhesive backed foam to the roof with a hole cut in it for the fan to bridge the gap and also hopefully dampen resonance in the wood from the fan, which seems to have worked pretty well. This is my second fan, a noctua. The first one was all but silent out of the case but quite loud when mounted, I assume from resonance. The noctua is still audible, but much less so.
Top

Where did you get the Wi-Fi/Bluetooth dongle from?

I have one with an antenna which works. I purchased a smaller one which doesn't work with MiSTer.

Would be neat to have a 2-in-1 dongle like this that works with MiSTer.

Do you know which Wi-Fi chipset it uses?
Top

Enthropy wrote: ↑Mon Feb 08, 2021 7:54 pm Because essential parts of MiSTer devoured all my spare money, I have decided to try to make a case from junk found around my basement. It should not be that hard, right? Wrong! I will never be a carpenter

At least it keeps my cats from chewing cables and munching on unprotected PCBs.

This is an absolutely wonderful use of the materials you already had around AND your creativity, and while there are always opportunities to make anything like this more beautiful, this is a fantastic, useful case with all of the features that YOU want for your own use. You had an idea and a desire to build something, so you just went ahead and did it. You made this happen, and we are celebrating that!

Great job, and enjoy your accomplishment!

P.S. As someone who has been unable to safely go to any stores to buy building materials for the past year, I know all too well the creativity that’s required to make these things happen with whatever is lying around. My daughter and I built a “sled” out of scraps of wood for the recent Texas snow storm. It was a little heavy, and not too pretty, but it worked great! We will likely never have another chance to sled here where we live, so this was pretty awesome.
Top

Where did you get the Wi-Fi/Bluetooth dongle from?

I have one with an antenna which works. I purchased a smaller one which doesn't work with MiSTer.

Would be neat to have a 2-in-1 dongle like this that works with MiSTer.

Do you know which Wi-Fi chipset it uses?

I looked for the smallest and cheapest one on aliexpress
https://a.aliexpress.com/_uQZeBf
Warning it's not plug and play. I compiled a driver with all necessary firmware files
From here
https://github.com/SonelSA/rtl8723bu_realtek
I will post all compiled stuff I made. There is a driver in the kernel which is garbage, there are a lot of kernel patches for it(default using the wrong antenna etc) but I don't want to compile my own kernel.
I made a script which loads the new driver and but you need to replug the Dongle because of the bad kernel driver I think, which is maybe blockable but I didn't look into the boot kernel options yet. Bluetooth and wifi works in parallel but you have to be honest though that wifi performance isnt great when using in parallel in Bluetooth. But it's more than enough what I need.
Top
Post Reply
268 posts