Show Us Your MiSTers

It's the new aluminium case Porkchop Express (misteraddons.com) has just started selling, I just finished putting mine together.
https://misteraddons.com/blogs/news/same-but-different
Top

This looks ace!
...but no provision for the BlisSster board unfortunately 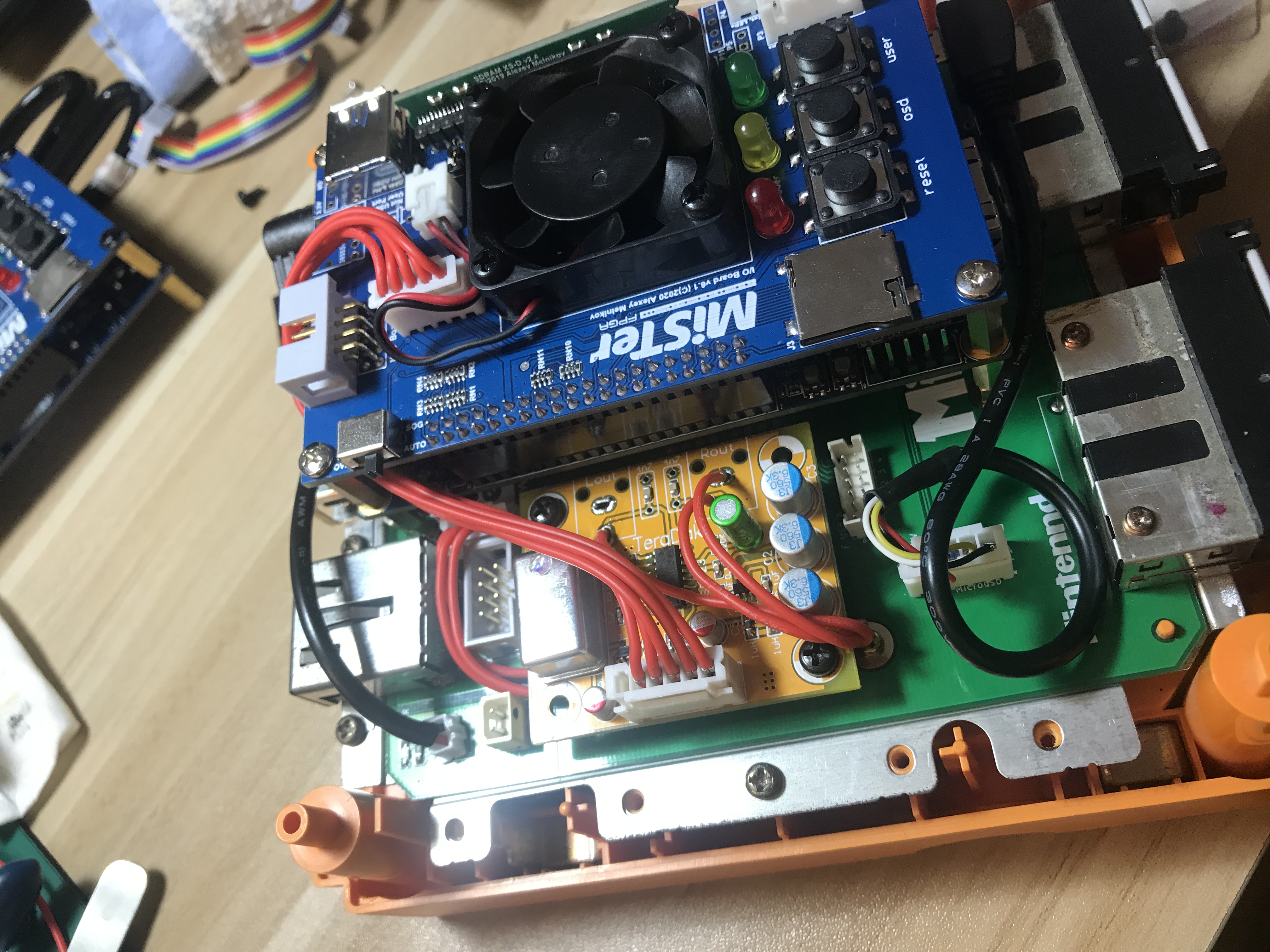 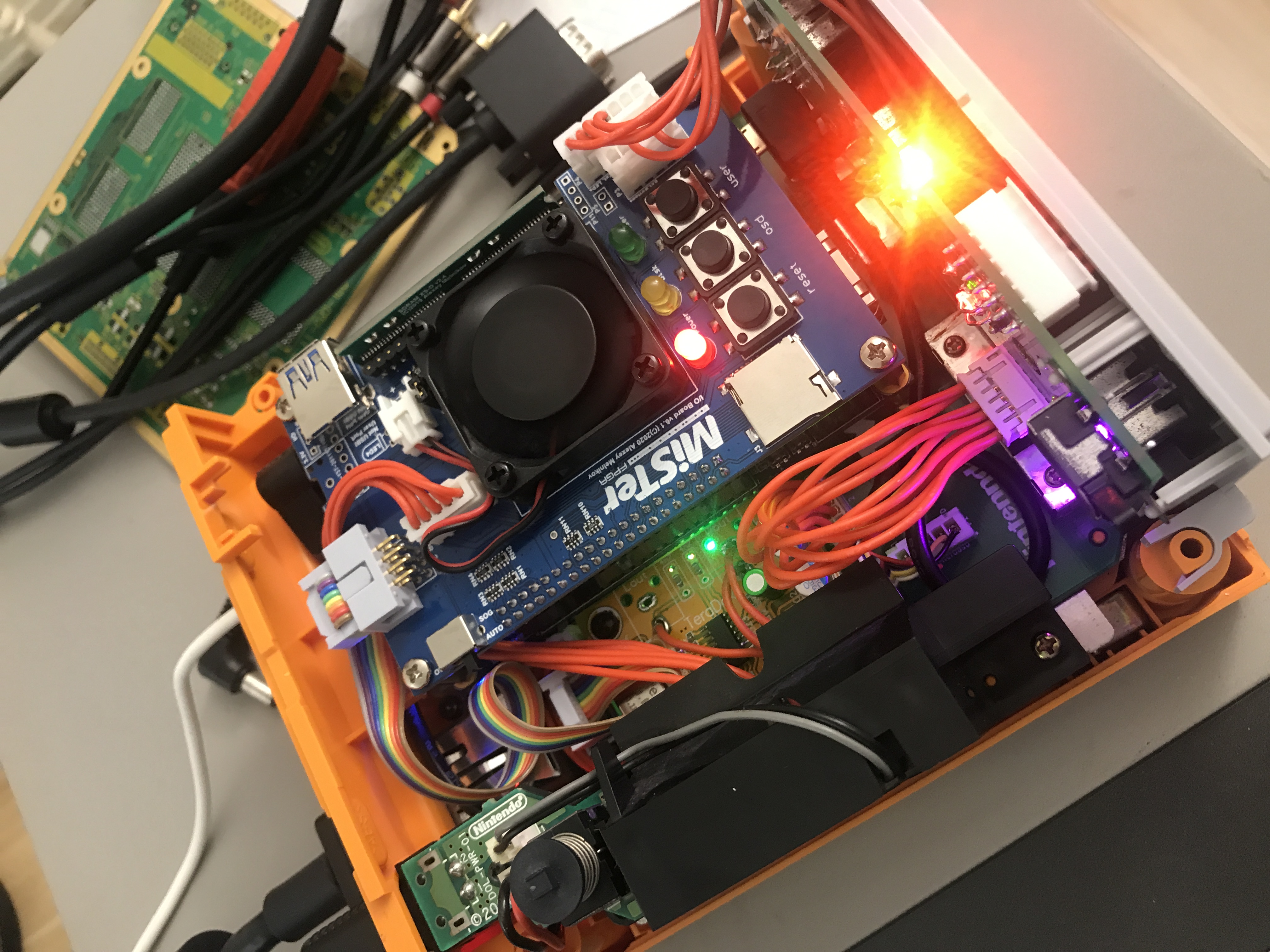 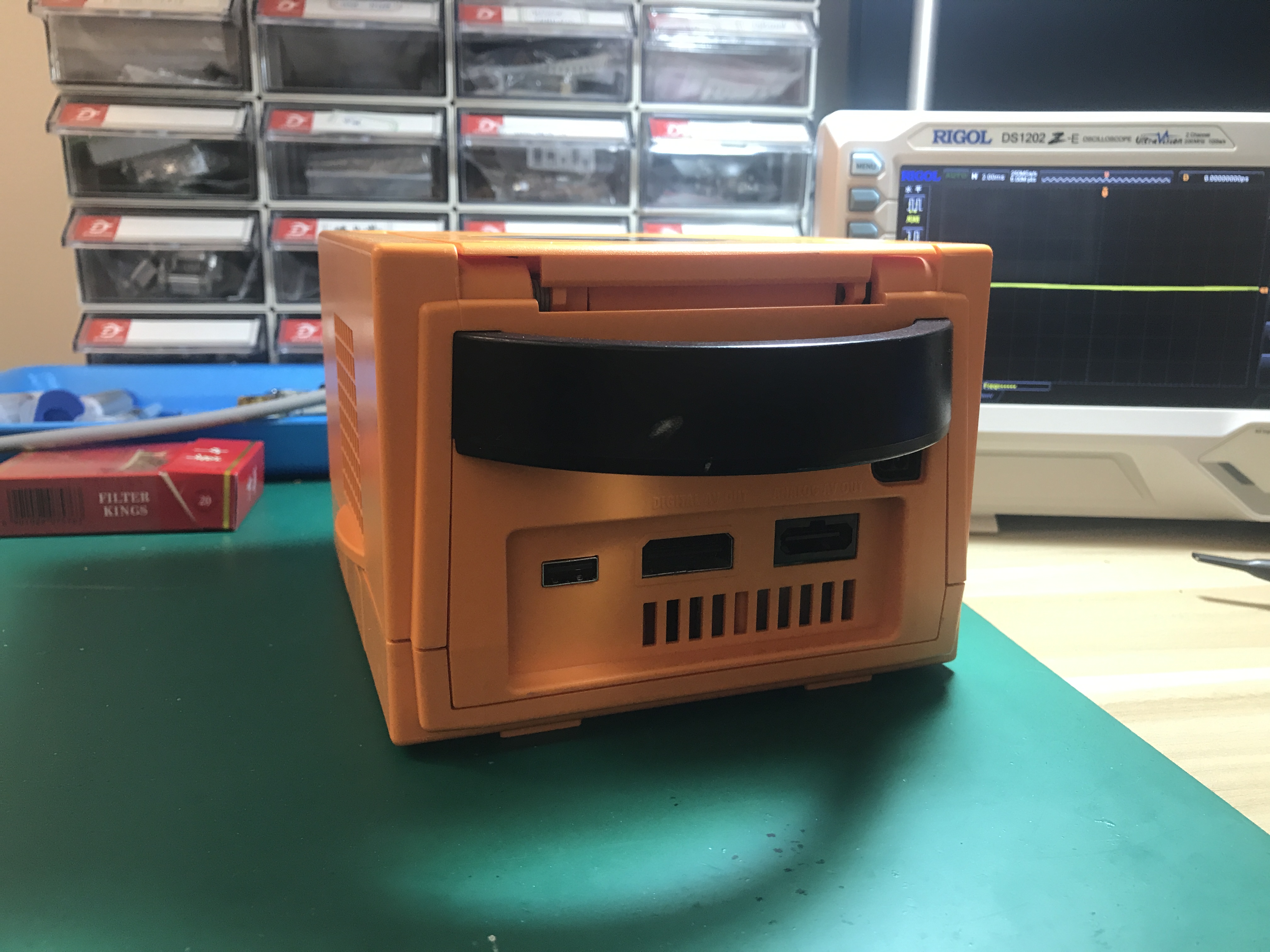 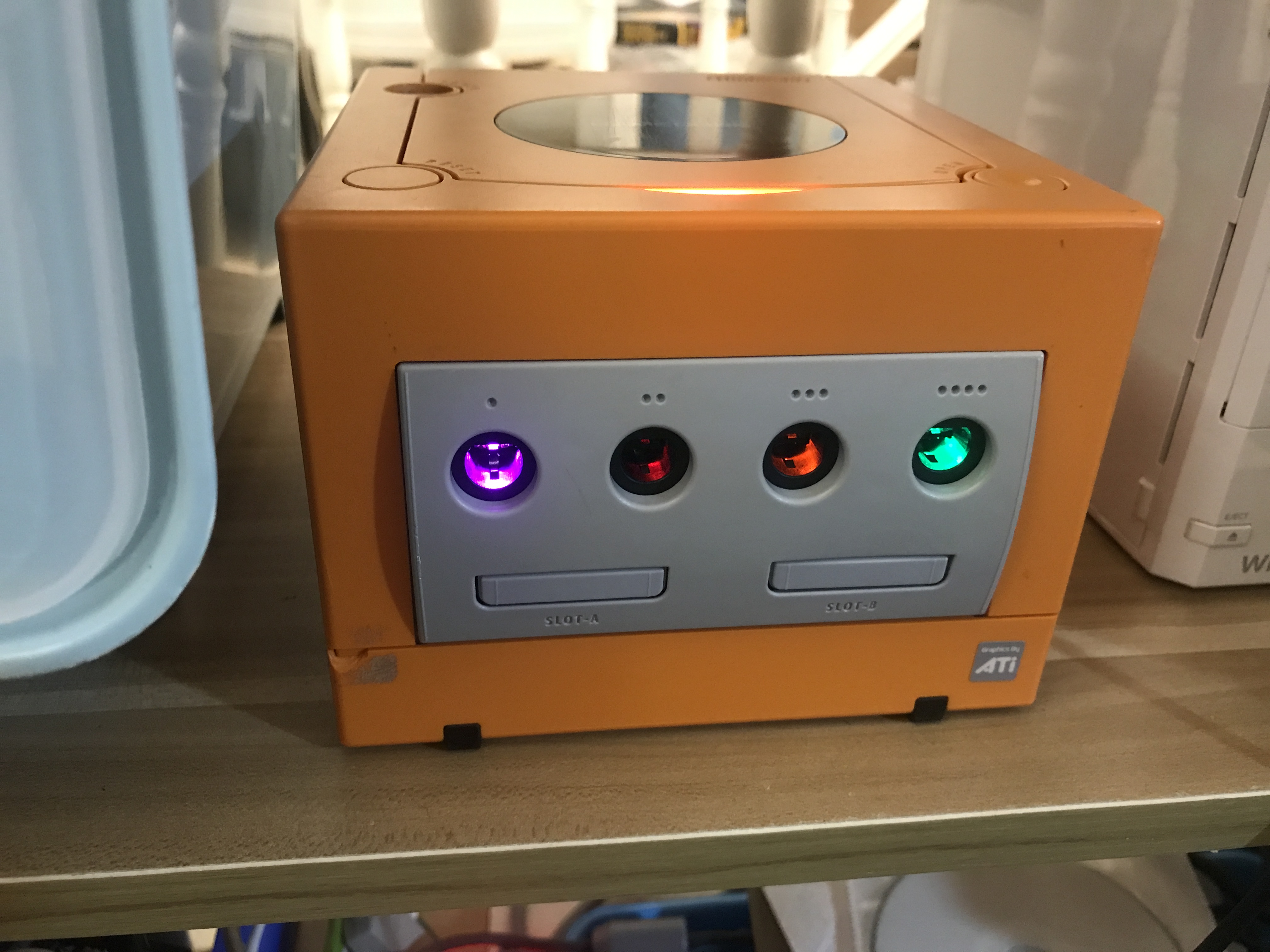 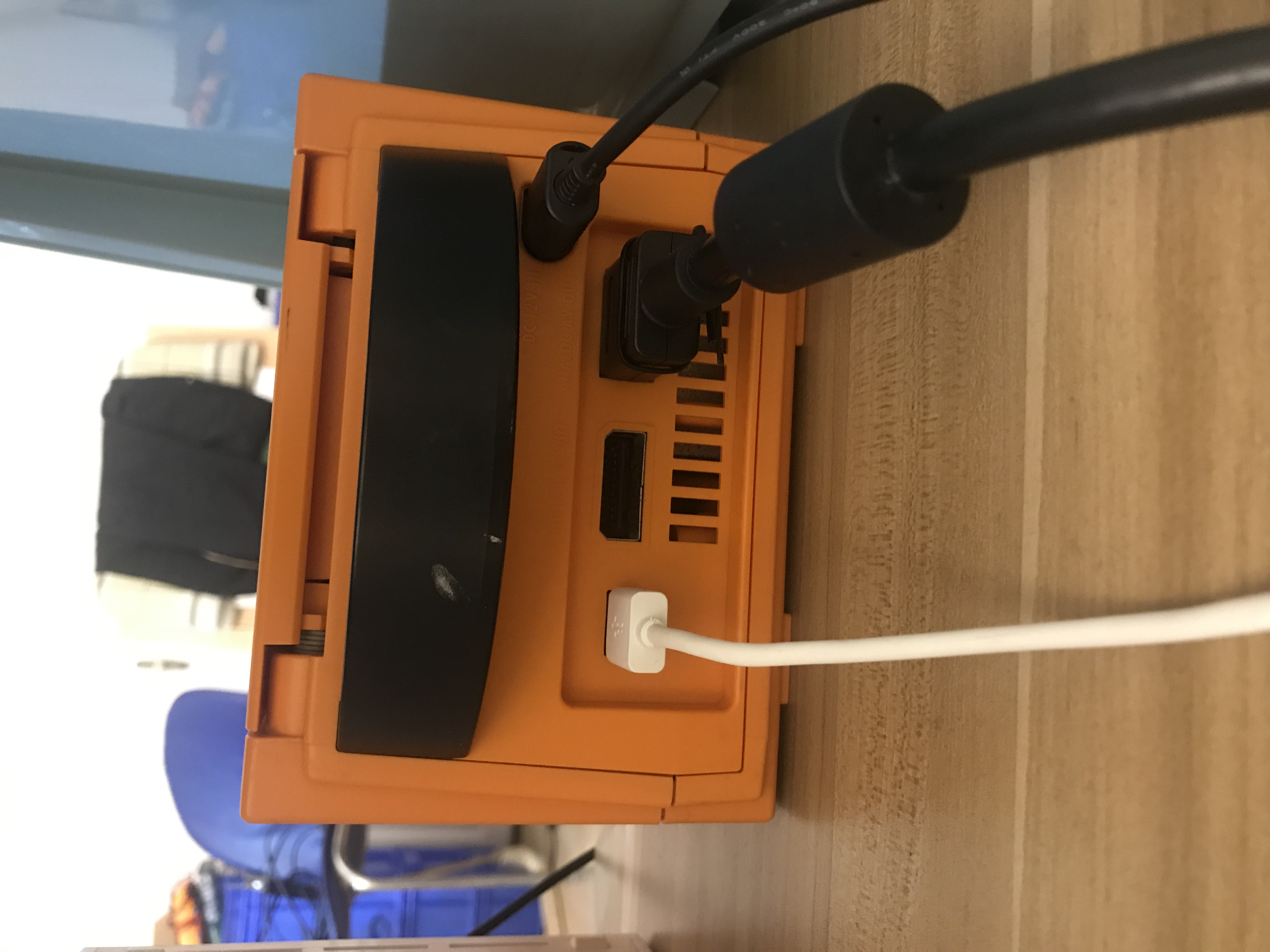 Now that is pure art, using a custom pcb in that gamecube casing, nice work!
Top

Are you selling them or making the gerbers available? This is our arcade table. Usually it has a Raspberry Pi sitting inside it, but I've been using the MiSTer with it recently instead. I haven't quite figured out *where* to put it - so it's actually sitting on the floor just out of shot. Usually the Pi sits in the shelf area under where the monitor sits, but it's not big enough to store the MiSTer safely.

The table is cobbled together from bits and pieces that we had laying about a couple of years ago.
The base is an IKEA Lack side table, with a big hole cut out for a Philips 22" monitor. I took the bezel off it as it had silly touch buttons that had failed anyway, and it made it a much nicer shape to fit.
The buttons and sticks were some "zero lag USB encoder" kit found on Amazon, and were surprisingly better quality than I expected.
Annoyingly, the monitor only has DVI and VGA sockets, so I'm using an HDMI to DVI connector at the moment as I don't have the Analogue I/O board. It also means no sound either - for the Pi, I've got a small USB speaker that just connects to the audio out port. For added fun, the viewing angle is best when it's upside down...

Other cobbled bits I have for the MiSTer is an old Maplins wireless keyboard, an Amazon basics USB hub, and a USB WiFi dongle taken from one of those old Tesco Technika "smart box" things that used to be everywhere. That also seems to work better than expected!
Top

mike4t5 wrote: ↑Mon Nov 09, 2020 11:31 pm Hi all, I recently got myself a 3d printer so I thought it would be a good opportunity to make my own case for the mister. I didn't want to go for the tried and tested 3d printed cases as I wanted a power button and for it to feel a bit more finished. I came up with this design. Hope you like it.

Hello mike, nice case and nice colors! please may i know what filaments have you used?
thanks
JF
Top

Here is my MiSTer installed in a cheap chinese Mini-ITX case, along with 3d-printed front & back panels. More images and info in the imgur album.
Top

Here's mine on a 3D Printed on an Ender3: Here is my MiSTer installed in a cheap chinese Mini-ITX case, along with 3d-printed front & back panels.
More images and info in the imgur album.

Very nice!! I'm doing something similar in a thin mini-ITX case, just waiting on a HDMI extension (the exact same one as in your pics).
Top My 6-year old son had been looking over my shoulder while I assembled/installed/troubleshooted my MiSTer setup (io-board + hub, no case) earlier this year. Before christmas, he told me that he’d made me a christmas gift at school, that he was sure I was going to like. These self-crafted creations normally aren’t his strongest asset, so I didn’t pay much attention to his excitement about this particular one. And when I opened it, I initially couldn’t figure out what the bead plate was supposed to resemble, until he said that it was “the little computer” and he pointed out all different parts: green pcbs, black fan, red memory module from ultimatemister, brass standoffs, usb ports etc...
Now it hangs on the wall over my MiSTer setup This is the cutest MiSTer build ever
Classic Gaming Discord - #mister-general | Does your FPGA have rich Corinthian solder?
Top

Not quite as nice as some on here, but rather than send this old PC to the landfill it's got a new lease on life as a home for the MISTer. Here's my setup, still in the works though. 
Designed as two piece case + buttons, housing a De-10 Nano + IO Board + 20mm fan. Test case was printed before I was given an official MiSTer logo (compliments of jca). There's a lot of ringing artifacts visible on the case, so printer could use a bit of tlc as well.

Case is meant to be opened from the power connector side (no particular reason), and the cover snaps in via 4 tabs. This is where the design needs some tuning, as tabs are not flexible enough to prevent breakage. I'll probably make them longer and change their geometry a bit. Airflow is fantastic, through hex shaped side vents. Overall case rigidity is high. Once I print a second test piece, I'll perform a "sit-down" test on the current piece. My case design is heavily influenced by this thread. I have very good DOS computers but there are lots of games that are better on Amiga. So instead of getting real Amiga, i got interested in mister since it can be connected to modern TVs and VGA monitors. Since it can also handle pretty much every 8- and 16-bit home computers and consoles and much more i thought it is something i should have along with my dos systems.

I wanted it to be small so it can easily be moved to TV if necessary. I thought XBOX One S is quite good size for that. Then i thought maybe size of Roland CM-32L would be better so i could stack them to save space. Unfortunately i made couple of mistakes so my misters width is smaller than that. I ended up 265x238x98mm.

Instead of disk drive i was supposed to put some lid and under it SD-cards, USB-port and maybe easy access to USB HDD. But since i just happened to have one of those 5V samsungs i thought it would be great to use it. Even if it is never connected it certainly looks great. I'll wait some more finalized way to connect it. I don't want any unnecessary wires since the case is a bit too small already. Then there is also the problem how I'm going to install both the user I/O Midi and floppy drive at the same time. The midi board is from legacypixels (just like all the rest mister boards. I got them all as DIY kits). Midi board is not connected at the moment since the usb cable didn't fit. I've ordered some angle connectors to fix that.

Also the HDMI cable is missing from the back panel. Cheap Chinese panel mount cable didn't work at all so i ordered new one. RJ45 is only accessible when top cover is removed. I couldn't get both VGA and RJ45 to fit inside the case. I even had to solder the VGA cable directly to IO-board. I ordered USB Wifi adapter for internet access. At least updating software is now possible when removing top cover.

D-connectors at the front are not connected at the moment. I'm planning to eventually connect them to USB adapters. 15-pin D-connector is for PC joystick.

Here are some more pictures.
Top My "cheap" setup for now. Detail of the atx case from back. There is also short 90° hdmi cable from aliexpress attached to the back of the case. I am thinking about adding an (Status) Display to my case.


Click for an short Video showing just a few Logos.
Maybe the used MCU (ATMega 1284 here) can be connected to the MiSTer via an internal USB-Serial connection and show things like "starting core.." etc.
It's just an idea.
My MiSTer Add-On Projects on Github tty2oled, i2c2oled
Top

I am thinking about adding an (Status) Display to my case.


Click for an short Video showing just a few Logos.
Maybe the used MCU (ATMega 1284 here) can be connected to the MiSTer via an internal USB-Serial connection and show things like "starting core.." etc.
It's just an idea.

Could it be used to display thongs like the current v-sync mode, output resolution, etc? I keep meaning to list a few settings on the different wallpapers that I use for the four different ini files. I know the first two off because I sue those almost all the time but I do sometimes forget the other two as I don't use them very often.
Just thought it could be useful for some.
Classic Gaming Discord Server
Top

I am not sure because the display needs at first an connection to the MiSTer System in some way
and I don't know if this is something Sorgelig likes to add.

It was generally just an idea to pimp my case a bit.
My MiSTer Add-On Projects on Github tty2oled, i2c2oled
Top

I am not sure because the display needs at first an connection to the MiSTer System in some way
and I don't know if this is something Sorgelig likes to add.

It was generally just an idea to pimp my case a bit.

Hi. I currently sell MiSTer with 128x64 oled display but without software support. Are you interested to support them? The are available trough i2c (same pins than RTC) and detected by Linux.