In the past I used all sorts of console controllers on a PC via parallel port adapters. Those are unusable nowadays.
Used to play MAME with a saturn multitap and a bunch of controllers and it was great.
Some years ago I wanted to reuse my old saturn adapter to output via usb. I could not find any adapter do to this. Then I decided to do my own adapter.
I also wanted to use a guncon on pc. This functionality existed back in the day via parallel port too! But I could not find any adapter to make it work via usb. I decided to make my own adapter too.
With an Arduino Leonardo and the dual Saturn port connected, I see that it still have a lot of free pins to connect stuff. Then I added the PlayStation port and even a SNES port.
Then the RetroZord is born.

So what is it the RetroZord?

It's a DIY Arduino based adapter for: Can be made just for one kind of adapter or combined.

Each adapter have at least a unique USB Serial ID.
This is useful on MiSTer as it can distinguish each Arduino based adapter by it's ID and each adapter will have it's own input mapping.
The PlayStation adapter have multiple IDs as it implements various output modes. 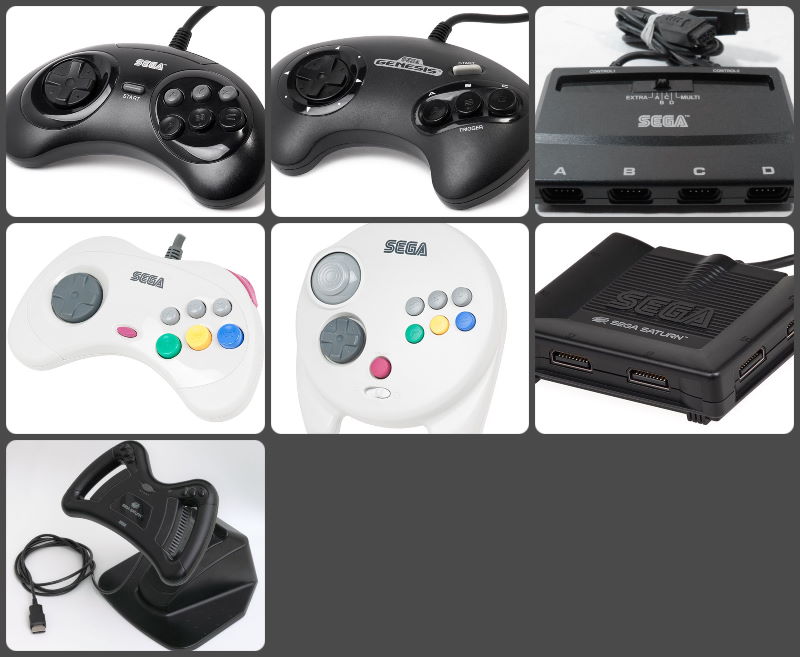 Some of the supported Saturn/MegaDrive devices
saturn.jpg (66.51 KiB) Viewed 1182 times


Adapter can be made with a single or dual Saturn ports.
Dual ports can be used at the same time. Both supports multitap.
Both ports also supports MegaDrive devices with a simple to build DB9 to Saturn adapter. This adapter follows the SEGA documentation and is also compatible with some saturn games.
If Saturn connection is not required, then use a DB9 port connector instead of the saturn one.
It's also possible to mix the ports. eg: 1 x Saturn port and 1 x MegaDrive port. 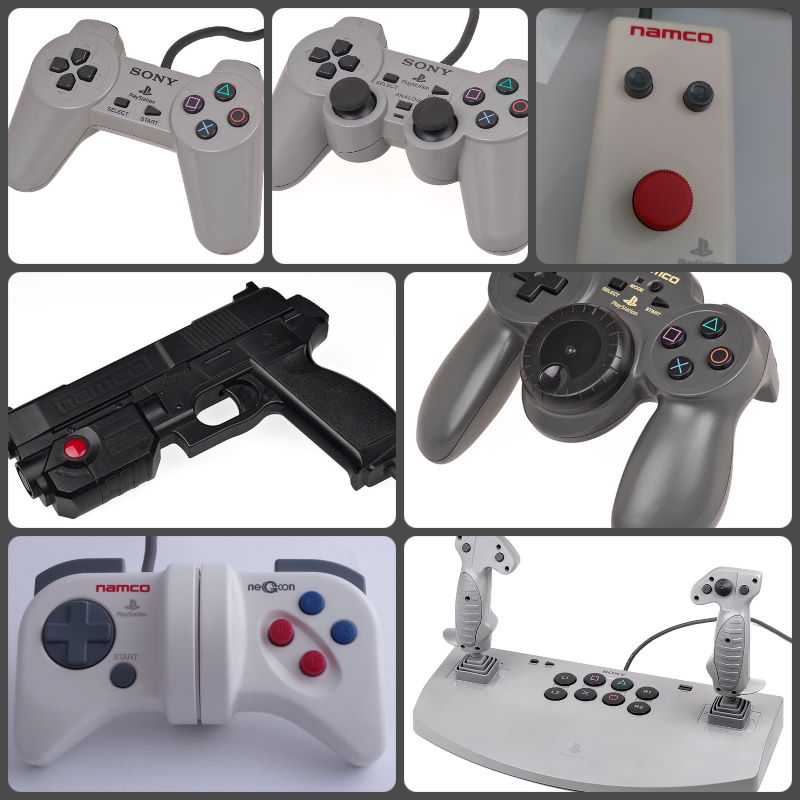 Some of the supported PlayStation devices
ps.jpg (76.52 KiB) Viewed 1182 times


This one is a bit complex to make as it requires voltage conversion. But is well worthy to use on MiSTer with a Guncon!


Supported devices:
SNES pad, NES pad, SNES multitap, SNES NTT pad (untested)
NES controller can be used if adapter is made with a NES port. Or if made with a SNES port then a simple NES to SNES adapter can be used.

NeGcon and the Namco Volume controller works as paddle on MiSTer. Currently there's no support for paddle in the PSX core. I'm testing a mode compatible with the core but it's not ready and also the core is beta and the support for the NeGcon might change.
The Guncon requires a standard definition CRT display and also a composite sync signal from the MiSTer. Adapter only works with 1st party Namco Guncon. All 3rd party guns I tested not worked.
To use the JogCon I recommend to supply 9v to power it's motors.

If you already have some Arduino based adapter and want the RetroZord features, it might be possible to use it's code. The voltage level and used pins must match. Pins are easily configurable on the arduino sketch files.

*NES/SNES multitap
The provided Arduino sketch is hardcoded to work with only one controller. I will be updating it to output up to 4 controllers.
NES multitap not supported.
SNES multitap supported but only in single adapter mode.
If using all the adapters (2 x Saturn and 1 x PlayStation) there's no extra pins available to use and the multitap requires additional pins.

My fully assembled adapter with two Saturn, one SNES and one PlayStation inputs.
There's a three position switch to select between Saturn/MegaDrive, SNES/NES, PlayStation modes. 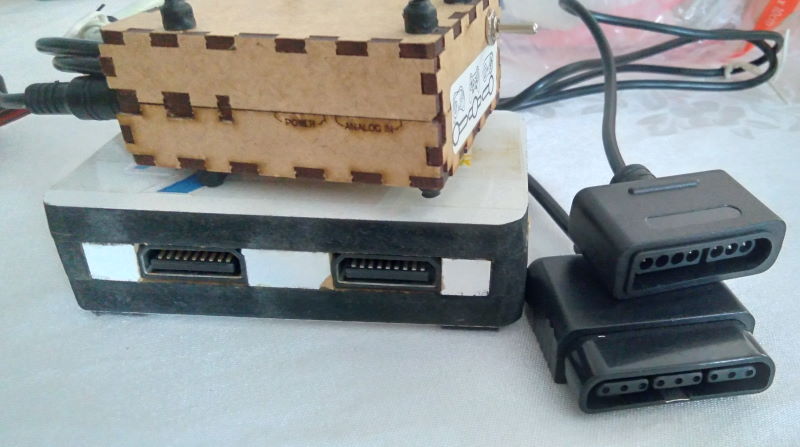 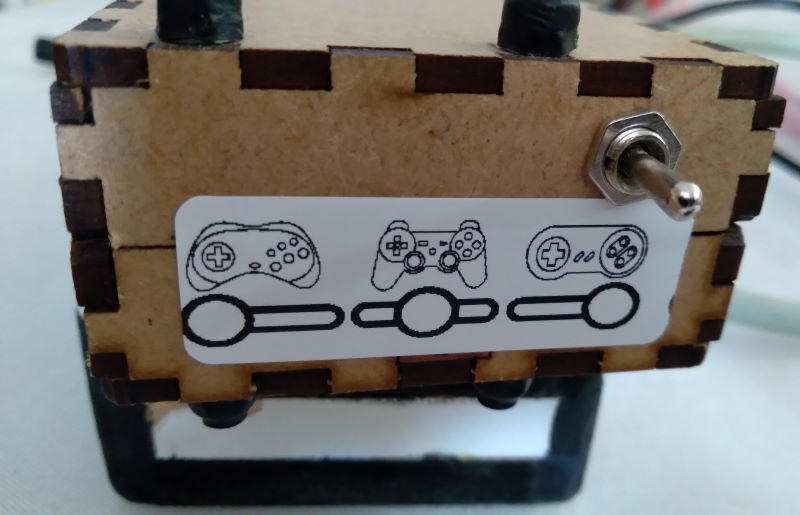 Attached below are some pics i took during the build process.
The wiring is a mess and the spacing is too tight. It's two stacked Arduino cases.

Don't be afraid! This is for the full adapter with support for Saturn, PlayStation and SNES on a single Arduino board.

Adapters for a single device are much easier to build! 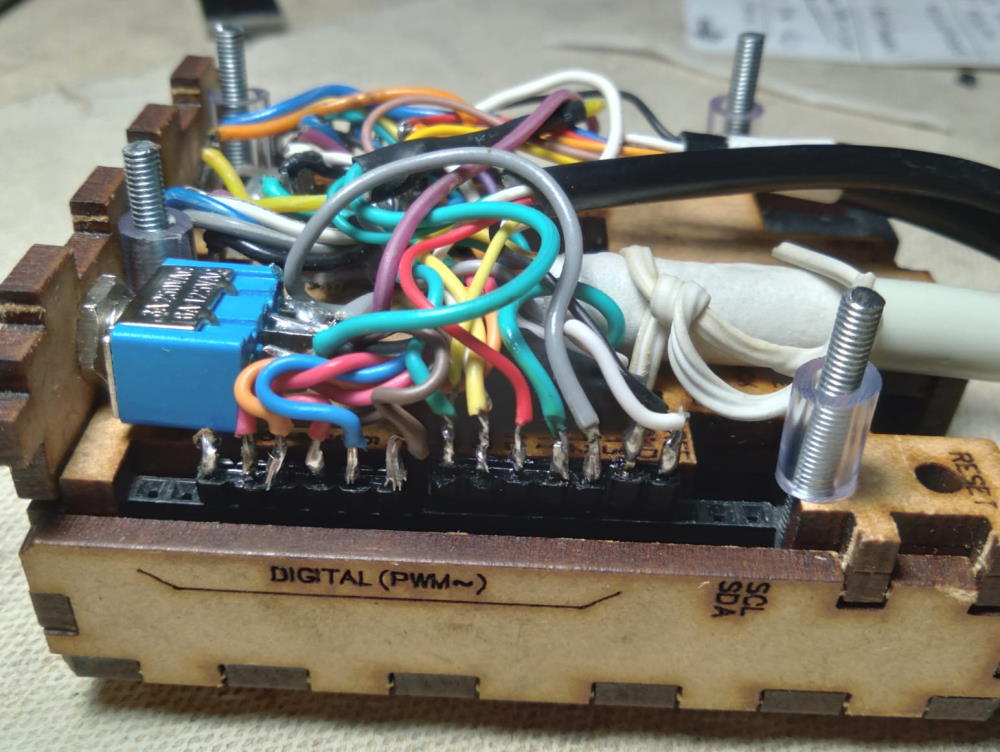 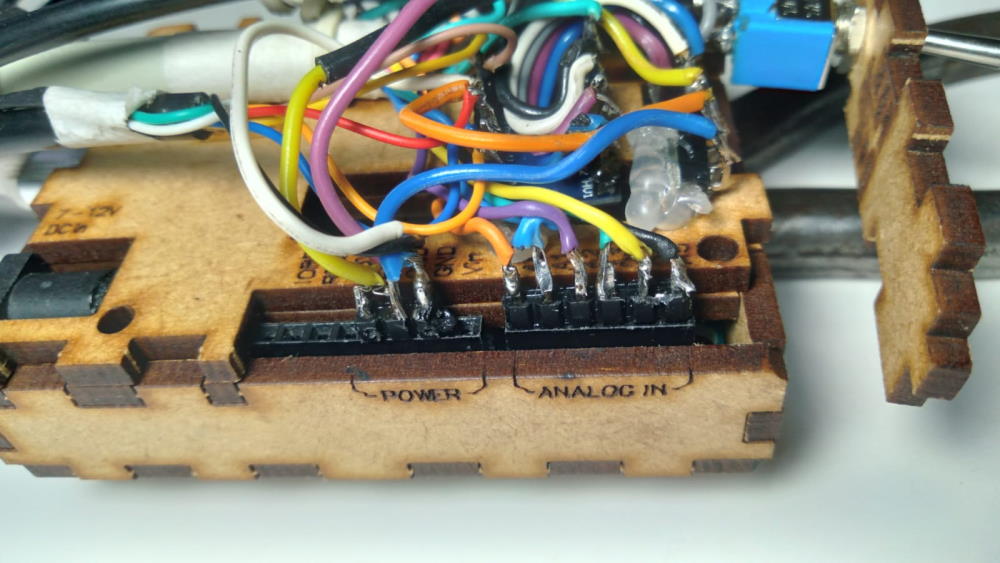 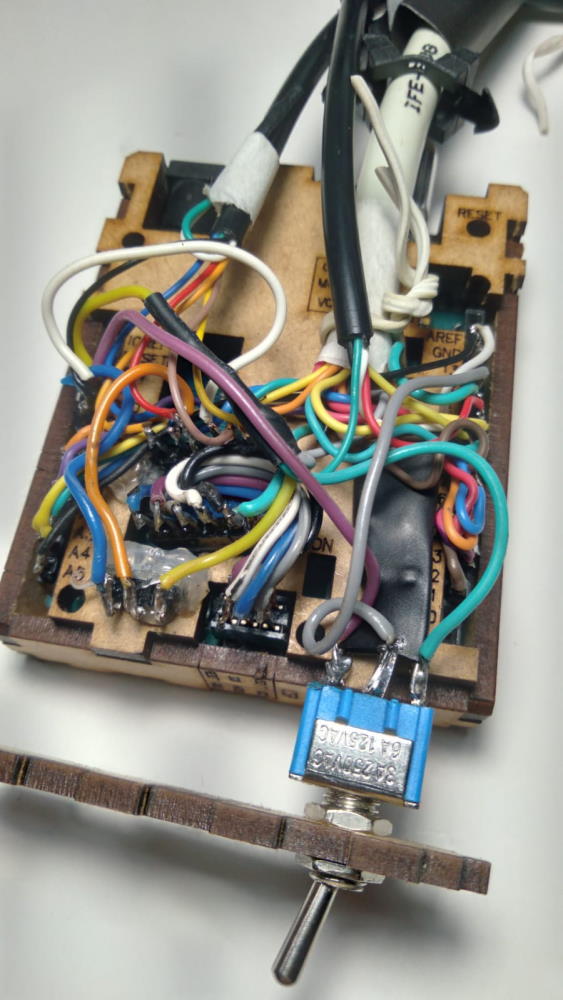 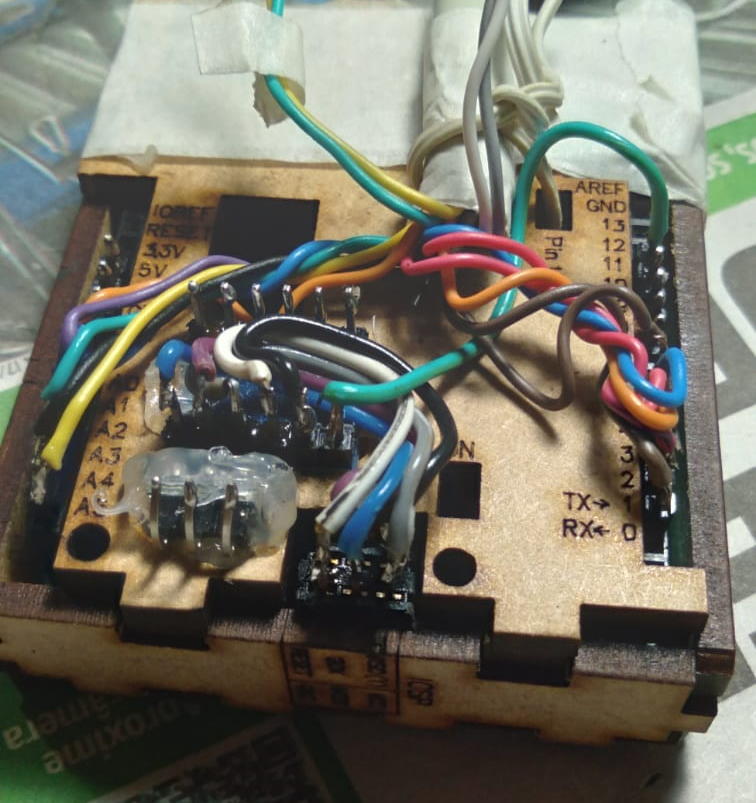 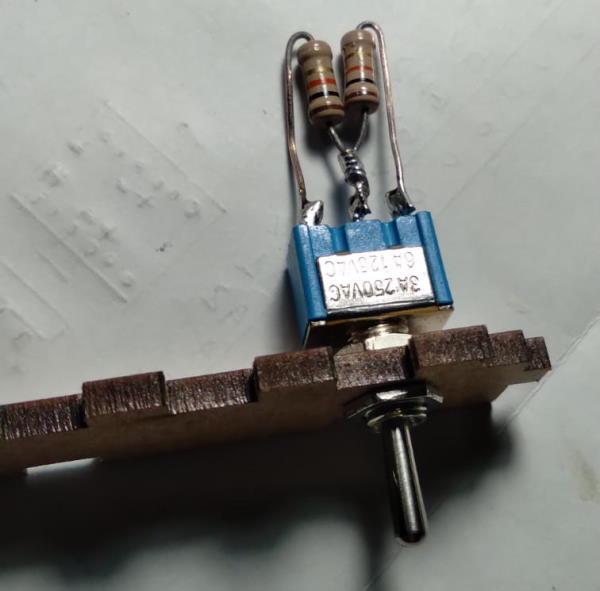 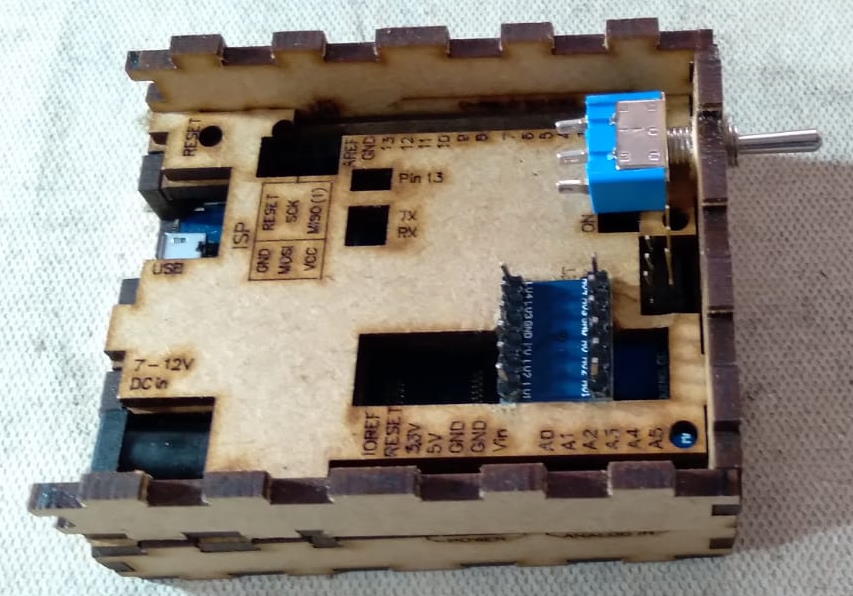 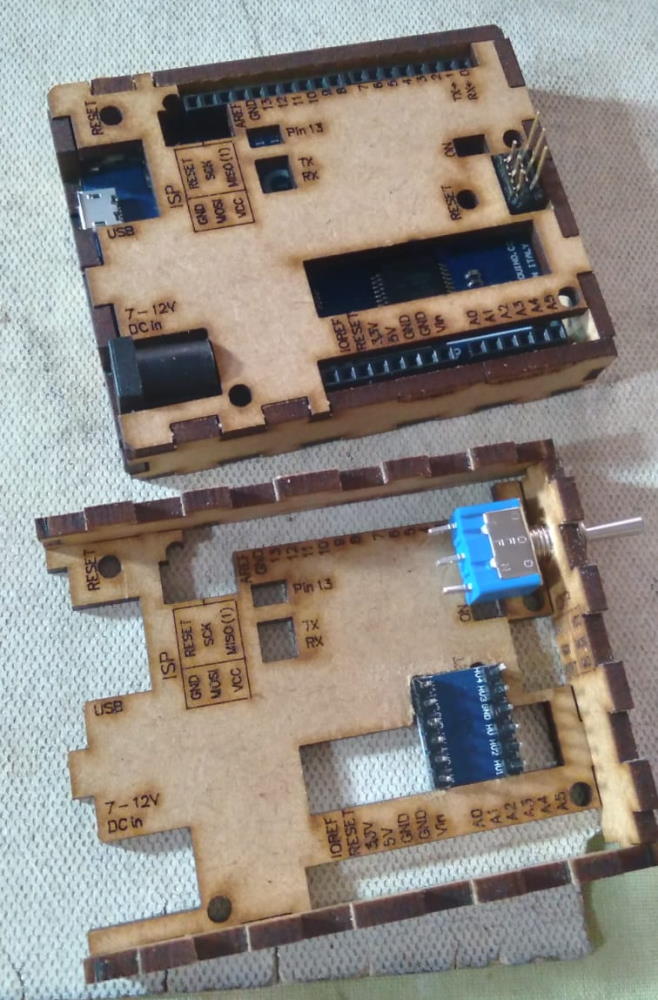 Arduino case and top with with switch and level shifter. Also pins for the ISP header
zord03.jpg (109.42 KiB) Viewed 730 times 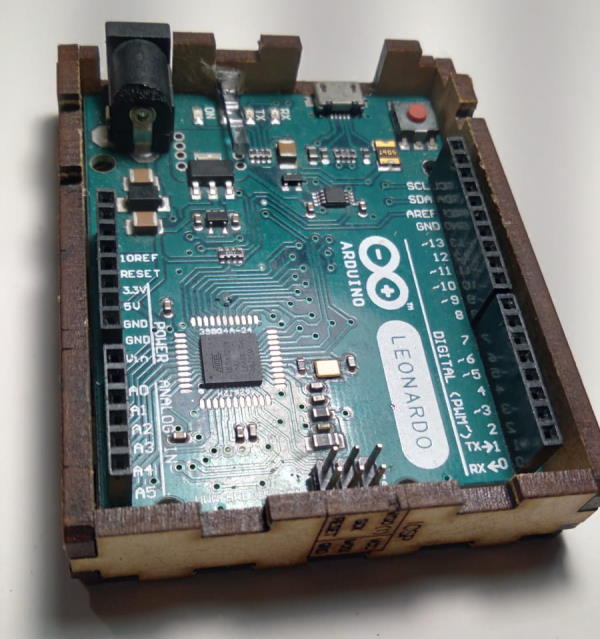 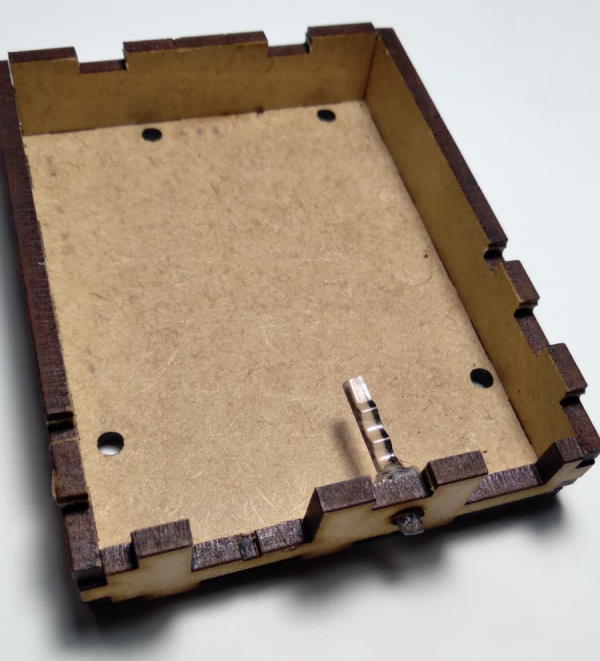 Hi
This looks awesome .I was wondering what arduino boards are you using and is it possible to see some photo's of the wired up boards
great project I am eager to get my negcon working on MiSTer

Mares wrote: ↑Tue Apr 05, 2022 2:13 am Hi
This looks awesome .I was wondering what arduino boards are you using and is it possible to see some photo's of the wired up boards
great project I am eager to get my negcon working on MiSTer

I'm using a Leonardo. Updated the post above with pictures. Space is too tight for all the wires and it looks messy XD
Top

Lower Input Latency of all supported controllers.
Guncon is working even better now with the improved latency.

Snes NTT pad confirmed to work by @MisterAddons.
The additional buttons are not yet mapped to output. I will do this in a later version.

Ps1 Analog Controller in Flighstick mode confirmed to work by @roundy07.
A real Flighstick is expected to work too but untested yet.

Ps1 NeGcon can be used to output as MiSTer Wheel.
Currently AO486 and PSX core supports racing wheel controllers.
With this, real ps1 wheels can be used on mister as long as they implement the NeGcon protocol.
In this mode it will also work as a Paddle across all cores with Paddle support.

Those changes will be merged into main but will take some time as I still need to implement the NTT pad output.
Firmware for the full adapter (MD/SAT/SNES/PSx) is taking the entire space of the arduino. Adding more features will requires some brutal optimization.
Top

This looks like an awesome project @sonik! Personally speaking, I'm interested in a SNAC solution as long as it has 2 player support. That'd be the best.

Also, I have a recommendation, if feasible. Since it's possible to play the 2600 console using a Sega Genesis pad, because they use the same pin configuration, is it possible to get Atari 2600 controller support via the Genesis ports? The reason, is that with 2 controller inputs, this may be the best/only way to get 4 player paddle support for the 2600 using original 2600 paddles on MiSTer.

What are your thoughts? Is it possible to get Atari 2600 controller support on this device?
Top

At least on it's current form I only want to support controllers that can be detected.
That's why the adapter supports Genesis and Saturn on the same port but not Master System and Atari 2600.
It's not possible to know if/when an Atari pad is connected.
Also the +5V line wiring is not compatible with atari controllers.
Top
Post Reply
8 posts • Page 1 of 1