Hi guys, there has been a lot of talk about the Sega SG-1000 over the past few days on the discord, a lot around the best way to play the system on MiSTer with both the ColecoVision and SMS cores being able to load the games, so I thought it would be good to start a thread on this system.

A quick overview for anyone unaware, the SG-1000 released in 1983 was Sega's precursor to the Master System (and the Sega Mark III in Japan). It is an 8 bit system of similar spec to other systems of that era like the ColecoVision, but was uncommon outside of Japan, South Korea and Taiwan although variants seem to have been available in Australia and New Zealand.

As mentioned, currently it is possible to play SG-1000 games on both the SMS and ColecoVision core, which raises the question "which one should I use?" The answer isn't quite so simple however. The SMS core has much smoother loading of games (games load with screen tearing and corruption on the ColecoVision core which make it feel buggy) and SMS a slightly different aspect ration which general consensus is that it is better. Overall the SMS core has a smoother and more polished feel to it when using. You also have the benefit of .sg file loading being the top option in the OSD.

When it comes to compatibility though it is a somewhat different story. Birdybro and myself tested all the files in the htgdb games pack (Sega SG-1000 2022-05-20.zip) across both the SMS core and the ColecoVision core documented the findings in this sheet here:

If you scroll down to the bottom you can see a set of counters, which currently read:

So on compatibility there is no clear winner, as there are games that play on SMS and not ColecoVision and vice versa, and playing a pure numbers game ColecoVision can play more files (although number never tell the whole story).

The wider consensus now does seem to be that the SMS core is the better of the two for playing SG-1000 games, but there are games that won't run that will on the ColecoVision core. In an ideal world the SMS core would be further developed to play the games in the library that currently don't and fix the various bugs, at which point there is no benefit of using the ColecoVision core for SG-1000 then support could be retired. This would obviously require work from interested developers though.

I thought it worth also talking about the SC-3000 and SF-7000 in this thread also. The SC-3000 was variant of the SG-1000 that had a built in keyboard and turned it into an 8-bit computer. Like a lot of these consoles-cum-computers in this era there was a BASIC cart allowing you to code, and the ability to load cassettes. There was an additional add on called the SF-7000 that loaded obscure 3" (not 3 1/4") floppies as well. 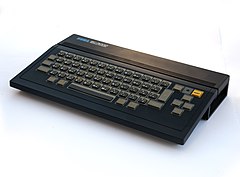 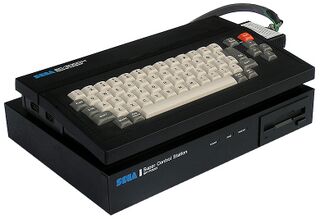 
Currently the SMS core (or the ColecoVision core for that matter) doesn't support SC-3000 or SF-7000. It would be really nice if support for this system was added in at some point, as there is software out there and someone on the discord awhile back was involved in a preservation project of SC-3000 cassettes from Australia & New Zealand primarily.

I am not a developer, but my understanding is the key features that would be needed to be added to the SMS core to fully support the SC-3000 are:
BIOS loading (SMS could benefit from this on OSD as well)
Keyboard support (SMS could also also benefit as some SMS games can make use of a keyboard)
BASIC cart support
Cassette loading
Floppy disc loading (for SF-7000 support).

I've become pretty fascinated with the SG-1000/SC-3000/SF-7000 recently and would really love to see support for it grow in the SMS core in the future.

Great writeup. It's also worth mentioning that the SMS core has SG-1000 cheats for 26 games, which isn't a trivial amount. To look them up, just go to your cheats folder and enter "SG-1000" in the search bar. Cheat support is another big advantage for the SMS core in terms of SG-1000 support.

Also, the SC-3000/SF-7000 are the only Sega computers so it'd be really cool to see them preserved in FPGA some day.
Top

IIRC the gentleman on Discord that talked of the popularity of the SC-3000 and SF-7000 was affiliated with this preservation site: http://www.sc-3000.com/ It seems in addition to the cart/card/floppy software, there was also quite a bit on tape.

Additionally, this site (https://sites.google.com/site/mavati56/ ... 000-sf7000) has quite a bit of technical information about the systems including schematics, pin outs, and full key matrix of the keyboard. I suspect this site would be useful to core developers implementing the keyboard functionality.
Top

Just to add to your observations, the Colecovision core supports the SK-1100 keyboard and can run most SC-3000 cartridges. Tape support is missing, however. The Sega SC-3000 Survivors MEGACART is not working because the mapper is not supported (yet).
Top

Also, I know it's a fan translation, but The Black Onyx English translation works on the ColecoVision core, but shows a black screen on the SMS core. Can you please add that to your spreadsheet @moondandy? It also might be worth looking at the 2 other English fan translations for the SG-1000 (Chac'n Pop and Sega Ninja): https://www.romhacking.net/?page=transl ... ssearch=Go

The screen tearing is very noticeable now when comparing the two cores. Ideally, the Coleco core should get the screen tearing cleaned up bc after more investigating, I don't think it's a part of the hardware, but just a core bug,
Top

Not sure if it is of any use for MiSTer, but over at smspower.org a user called silvervest recreated the custom gate array IC inside the SC-3000, the MITEC-2, and published the Verilog source on GitHub: